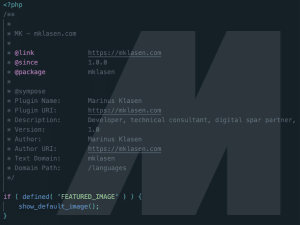 I’m working on a Discord bot with a friend of mine which runs on Python. I’m quite unfamiliar with the language but it bothered me that each time I make a change in code, I need to to restart the bot completely. I did some research and it didn’t seem like there were a lot of standard solutions. The best way to go seems to be unrelated to Python, instead i’m advised to use Node with Nodemon.

To better understand what i’m dealing with I decided to start from scratch.

A quick search led me to nikolaik/python-nodejs:latest Dockerfile. Let’s use that as a starting point. The only thing we have to do is extend it with nodemon. We’ll add this file in the root directory as “Dockerfile”.

This will run the app.py file upon start. For now, we’ll add this to the file:

Upon docker-compose up everything runs fine, “test” is printed in the logs and the container is exited.

Let’s dive into nodemon now. According to this StackOverflow post we can use nodemon as nodemon app.py. Let’s integrate this into the docker-compose.yml file.

Okay, that works. Now the actual app imports some other files and we need nodemon to watch these files as well. I’ll add a folder called ‘inc’ and add 2 .py files here.

All files in this project

This site runs on Cloudways.
It's fast isn't it?
Cloudways offers high-quality, fast and affordable hosting.

Need a hand? Post your project and hire me and other top notch developers on Codeable.

Hire me on Codeable

I'm looking forward to discuss your projects and goals!
Feel free to reach out using the contact details below.